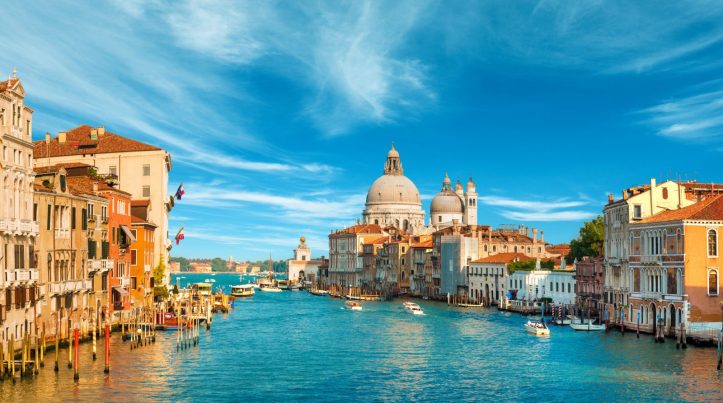 Planning on traveling to Italy can sometimes be made less simple when it comes to deciding where to go. Aside from the storied wonders of its capital and ancient city of Rome, the country has a formidable selection of cities to consider visiting, each having their own grand history, culture showcases, art collections and choice cuisines. It is understandable, considering that before the formation of a united modern state, Italy was once a collection of independent city-states, republics and minor kingdoms, a situation that encouraged the development of unique cultures, and a strong sense of provincialism to this day.

This is easily seen in the five autonomous regions of Italy, and most especially at the northeastern region of Veneto, where a nationalist movement actively advocates for either greater autonomy or complete independence from the rest of the nation. All this stems from the strong spirit of its regional capital, easily one of the most beautifully constructed cities in the world. A community built on a collection of small islands, using canals for roads and watercraft for vehicles, this city was once a republican city-state and one of the mercantile powers of the olden days. Today it is one of the primary tourist destinations of Italy: the City of Canals named Venezia or Venice.

But before it can reach these historical heights and gain the fascination of present-day travelers, the origins of Venice were much humble, occurring in a time of great danger. In the twilight period of the Roman Empire, when its heartland in the Italian peninsula could no longer defend its settlements from invading barbarian hordes, groups of refugees from the surrounding area fled to the marshy islands of the Venetian Lagoon where they built a series of settlements. Over time these island communities were unified into a town and city, with their first leader, called the Doge, being elected in the 8th Century AD, making Venice a republic in government.

Due to its strategic location, Venice began to develop as a merchant port and trading hub between Western Europe and the Eastern Roman (Byzantine) Empire. During the Crusades to the Holy Land the city was an important staging point for the Christian armies, although the Venetians delved in dastardly manipulation of the 13th Century Fourth Crusade by having them sack the Byzantine capital of Constantinople. It was also during this period that the enterprising merchant Marco Polo undertook his journey to Yuan Dynasty China and lived for a time in the court of Kublai Khan.

But Venice’s time in the sun came to an end with the rise of both the Ottoman and Holy Roman Empires, and its formerly lucrative eastern trade was damaged by the discovery of the New World. Reduced to simply trying to assert its independence, Venice ended up being conquered by Napoleon, then later annexed by Austria-Hungary and finally “unified” with Italy, though some nationalist sentiments lasting until today may take exception to that.

Present-day Venice has ridden high on the foundation of its prominence in European and Mediterranean history. To that end the city has taken steps to carefully preserve the landmarks of the past to such a degree that the center of Venice at first glance seems unchanged from how it was in centuries past. Historians and scholars might say that if Marco Polo accidentally travelled to our time period on his way back to Venice from 13th Century China, he might arguably still recognize it as his hometown.

Few cities could ever hope to look as iconic and timeless as Venice now. The most memorable location of the historic city center would have to be the Grand Canal at its heart. This waterway, the widest out of all the canals in Venice, cuts a reverse S-shape through the floating town, where the largest concentration of boat traffic goes through. The Ponte Rialto, built in 1592, is the most famous bridge spanning the Grand Canal. Other famous landmarks line its banks, like the Palace of the Doge where the leaders of Venice resided and its government met. Eight Doges of Venice were from the Contarini Family, which had its own palace, now called the Ca’d’Oro or “House of Gold.”

Across a side canal from the palace is the New Prison connected by the Bridge of Sighs, because popular legend has it that condemned prisoners would sigh at their last sight of the outside world as they were led to their cells. Another historical bridge is the amusingly-named “Bridge of Breasts” where prostitutes used to “advertise” themselves to potential customers.

Venice is also a significant center of the Catholic faith, being accorded its own archdiocese that is seated at the Basilica of Saint Mark, which is styled in a blend of Italian and Byzantine. It was also called the Church of Gold for having mosaics with ground gold in the designs. Another prominent church is the Basilica of Santa Maria della Salute, built in the 17th century as a token of gratitude by the Venetians who survived an outbreak of plague at the time.

The arts are also ably represented in Venice, which has one of Italy’s twenty state academies of art. The Academia had its own gallery, which became an independent art museum in 1879 and contains masterpieces of artists who worked in Venice like Titian and Tintoretto. Even Leonardo da Vinci is represented here by his drawing of “The Vitruvian Man” (referred to in “The Da Vinci Code”).

No traveler could ever go to Venice and not be awed one bit by the sights and wonders it has to offer. And that is why it is also tragic that currently the historical city is in danger of literally sinking into the sea due to erosion and human negligence. As early as the year 589, peak tides at the Venetian Lagoon has caused parts of Venice to flood, a phenomenon known as “Acqua Alta.”

This flooding is contributing to the deterioration of the land foundations that the city sits on, and the tendency of tourists to overcrowd whenever they arrive is no help either. Sadly, the worsening conditions have spurred residents of the city to move to the mainland, and only about 20,000 still live on Venice proper itself.

Such a state of events makes it feel like there is now a ticking clock hanging over the Queen of Canal Cities, one that reminds people to come and see it with their own eyes while the city still stands over the water. It is a sobering thought, but that should not rob you of your enjoyment should you ever pay a visit to Venice. Hopefully it will heighten your appreciation for the City of Canals and former empire of merchants and traders, and pray that ongoing international efforts may yet preserve it for future generations to see.