“WE ARE” and Other Happenings with GUJI LORENZANA 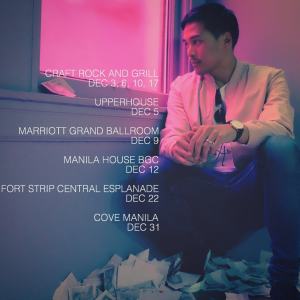 I’ve been following the journeys of Filipino celebrities for some ten years now; and one thing you just got to admire and respect is somebody who’s able to hold onto and keep pursuing their first dream, even after experiencing success and popularity in another field. American-born Guji Lorenzana first set out to write music and sing, and started his stint in the entertainment industry as such in 2006. As he proceeded however, he was steered into careers for acting (stage and screen), modeling and DJ work. But he never forgot what he set out to do, and although he’s not letting go of his other commitments, Guji can’t be any happier with the latest progress under his current label.

His tenure under Warner Music Philippines, effective last September, has already borne with his first single under their auspices. Released on Spotify last October, “We Are” is a beautifully catchy pop number that starts out mellow and then intensifies into a vibrant slogan of togetherness-even-when-apart at the refrain. Now that a “lyric video” of the song is now available to view online, it’s only a matter of time before more fans can learn the words and follow along to Guji’s distinctive voice.

Outside of studio recording, Guji is also an active presence in the live music scene. Around Metro Manila he’s a familiar presence at performing his music singles, which are of the alternative rock and pop-rock genres, to appreciative crowds. In that regard, Guji stands as one of the present-day stalwarts for promoting the cause of OPM, and his talent makes the “support Filipino” message coming out of his music all the more powerful in its rendition.

Speaking of live performances, Guji does have quite the active schedule all December too. His most recent outings have been at Metro Manila’s Upperhouse and Marriot Grand Ballroom last week, as well as the Manila House BGC just this Tuesday. Still on the calendar for this month are Guji’s gigs at the Fort Strip Central Esplanade (Dec. 22) and Cove Manila at the last day of the year. And he’s even hinted that he could squeeze in more dates for his fans. You rarely find a great combination of truly talented ear for music and dedication to performing in an artist like Guji.

It’s no surprise either that Guji has been earning well-deserved accolades for his work. Just last November 1, the Aliw Awards, which gives recognition to entertainers performing in the Philippines and abroad, have nominated him in two categories for their 30th awards ceremony on December 19. Guji is in the running for “Best Performer in Hotels, Music Lounges and Bars” for his stint at The Fort Strip, and is co-nominee with Marq Dollentes, Jane Joseph, and Steven Ofori in “Best Major Concert (Group)” for their “Rediscover” gig at the Metro Walk.