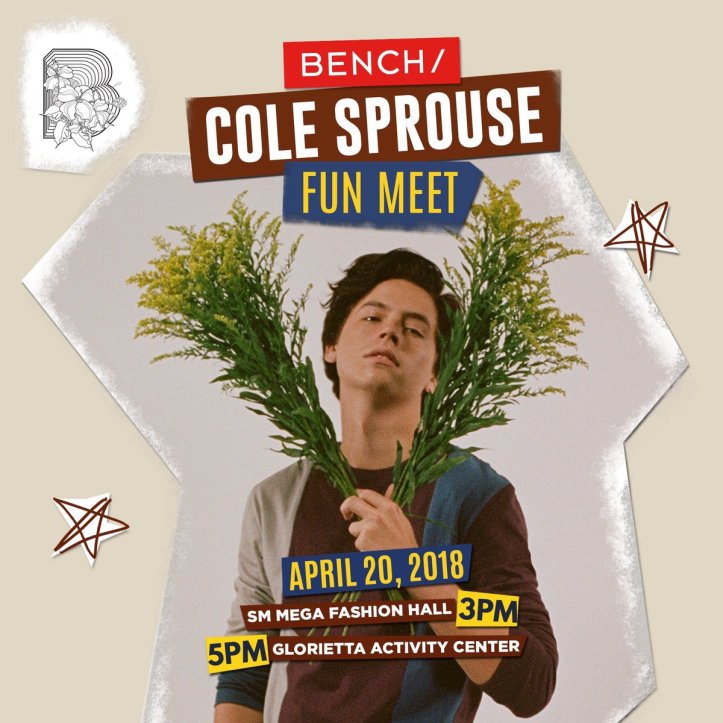 Regardless of how it is being watched, on TV or streaming, there’s no doubt that the weird-leaning teen drama series “Riverdale” on The CW is one of the hottest shows around now, with significant positive reception. Not for nothing did it manage to get renewed for its ongoing second season, with a finale coming soon in May. Part of its success has been the strong performances of its cast. In particular, the actors and actresses playing the teens of Riverdale High have been very effective. To be specific, one of the breakout stars is Cole Sprouse, who plays “Jughead” Jones.

For fans of “Riverdale” and Cole Sprouse in the Philippines, there is some major good news for you. As CNN Philippines tells it, the American actor will be coming to the country for a meet and greet appearance two weeks from now, on April 20. The event will be sponsored by local retail clothing brand Bench, under the auspices of founder Ben Chan. Chan has personally met Sprouse and posted a photo of them together on his Instagram account last Sunday April 1. He also posted a major announcement for the meet and greet event, assuring that it’s no April Fools.

Details on the Bench Fun Meet with Cole Sprouse are as follows. The 25-year-old actor of Jughead in “Riverdale” will be visiting two locations in the afternoon of April 20. He will first be at the SM Mega Fashion Hall at 3 PM, and then move on to the Glorietta Activity Center later at 5 PM. Ben Chan’s Instagram announcement did not include specific mechanics for fans to get up close and personal with Sprouse, promising that more details will come soon in future updates. It was no surprise then, that #ColeSprouseforBENCH is now a Twitter Philippines trending topic.

Cole Sprouse started his showbiz career as a child actor, in tandem with his twin brother Dylan Sprouse. Cable TV watchers who have The Disney Channel would easily recognize the two of them as the titular characters of “The Sweet Life of Zack and Cody”, which ran 2005-2008 (and 2008-2011 as “The Suite Life on Deck”). He played Cody, if you need to remember. His portrayal of Jughead on “Riverdale” established his image as a mature actor, especially with the plot development of his relationship with Betty Cooper (Lili Reinhart), hinted strongly in their interactions from the original Archie Comics.