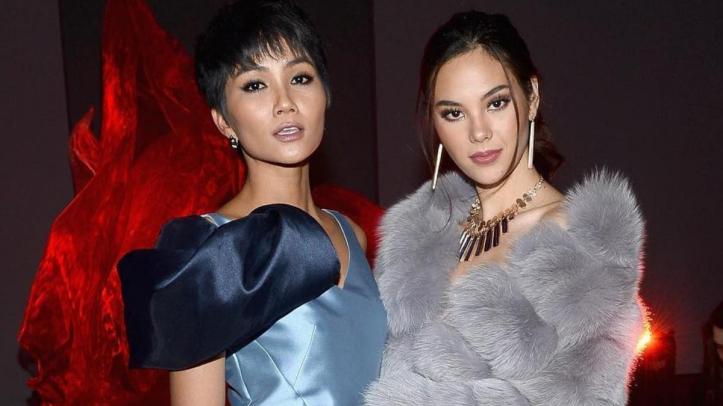 Way back at the start of February, the Philippines played host to an unexpected visit from H’hen Niê, Miss Vietnam in the recently held Miss Universe beauty pageant in Thailand last December. We certainly remember that because our own candidate, Catriona Gray, won and became the fourth Filipina to carry that major beauty title, and only three years after the last one to boot. What H’hen was doing in the country was anyone’s guess, though it was possible that she may have been planning to meet with Catriona, who was in New York at the time. Apparently, H’Hen followed her.

Inquirer.net tells us that following her Philippine visit last February 1, Miss Vietnam and Miss Universe 2018 finalist H’Hen Niê has finally had her little pageant reunion with reigning MU titleholder Catriona Gray. The two of them got together in New York, headquarters of the Miss Universe Organization (MUO) where they were seen attending the New York Fashion Week this Wednesday, February 13. H’hen was present there as support for fellow Vietnamese lady and up-and-coming fashion designer Phuong My, who was showcasing her designs on the NYC catwalk. She then took photos which she posed on Instagram, showing her, Catriona, MUO manager Esther Swan, and pageant judge Iman Oubou.

I’m so happy to see my sisters @imanoubou my judge, @catriona_gray #MissUniverse2018 and @swanbirdnyc MUO manager at #PhuongMy show #NYFW What an amazing show! Thank you @phuong_my for inviting me! Thank you all my loves for your attendance. I am extremely happy to see you again today! Costume @phuong_my 📸 @tuankhoi02 retouch by @tafaholic13

On her captions, H’Hen thanked Phuong My, for extending to her an invitation to the New York Fashion Week. She also referred to Swan and Catriona herself as her “sisters” from their time spent at the Miss Universe pageant, now well over a month earlier. The overall mood during the show was incredibly festive, with H’Hen and the other ladies in attendance busying themselves with selfie after groufie from all angles. Even the official Miss Universe Instagram page took notice of the fun, snapping a neat full-body shot of the two competitors and friends together.

But the fun did not end with the fashion show itself. It was Iman Oubou’s turn to share some great photos of herself with H’hen Niê and Catriona Gray as they strutted in their own high-fashion get-ups along the still-cold and snowy streets of the Big Apple. While Oubou described the shots as candid, they still look as pageant-worthy as expected.

The serious #Streetstyle shots are cool and all but these candids are more fun!! Cheesing with these @missuniverse queens @catriona_gray and #MissVietnam @hhennie.official post @phuong_my fashion show! #reunion #nyfw #missuniverse 📸: @tuankhoi02

Miss Vietnam was clearly prominent in Asia following the Miss Universe pageant when she donated all of her winnings to charity in her native Vietnam. In the Philippines, she is also famous for her close friendship with her Filipino pageant coach Anjo Santos, whom she had already reunited with during her recent visit to Manila.