Like the multimedia juggernaut that it is, Disney is going in guns blazing on movies this 2019. For its subsidiaries Marvel Studios and Lucasfilm they have quite the selection of anticipated pictures like three MCU installments for the former and “Star Wars: Episode IX” for the latter. But Disney’s own production studios are not slouching, with three live-action remakes of their classic animated canon as well, plus a new animated film on top. This week, two of these films released teasers, and the viewer reaction for them are different as night and day: derision in one, awe in the other.

The much maligned teaser is that for the live-action version of 1993’s “Aladdin,” which rolled out its second trailer Monday, February 11. While certain elements of the preview garnered positive nods, such as the production design for the Arabian city of Agrabah, the “Prince Ali” segment and Princess Jasmine (Naomi Scott), points were docked by fans concerning other factors. One was the squeaky voice of antagonist Jafar (Marwan Kenzari), which is a shame considering earlier photos of the actor in character were met with tentative approval. Next is the perceived wooden portrayal of lead actor Mena Massoud as Aladdin himself.

But the big offender to fans is the depiction of the story’s Genie of the Lamp, portrayed by Will Smith. Earlier shots of the actor as the Genie had him play it live, causing uproar that his skin was not colored blue like the original animation. The new trailer did see Genie Smith rendered with CGI blue skin, but now viewers are even more turned off to his role, more with the classic-lovers who believed on the late Robin Williams could portray Genie for Disney. 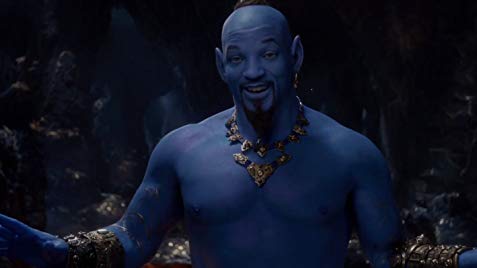 If the second “Aladdin” trailer was criticized, CNBC reports there was little to none of that bile when Disney released the first true teaser for “Frozen II.” Fans of the 2013 animated blockbuster were stunned with wonder at seeing their beloved characters Elsa and Anna, and their companions on the start of a new adventure.

Said adventure looks to be taking a darker and more foreboding turn, as seen from the visuals of Elsa trying to repeat her freezing run atop a stormy sea, or Anna leaping across a chasm and using a sword against a figure sneaking up behind her. New characters were also featured, with the heroes’ journey to a place in autumn.

Disney’s “Aladdin” live-action film premieres this May 24, while the heavily-anticipated “Frozen II” comes in autumn on November 22, like the depiction in the trailer.