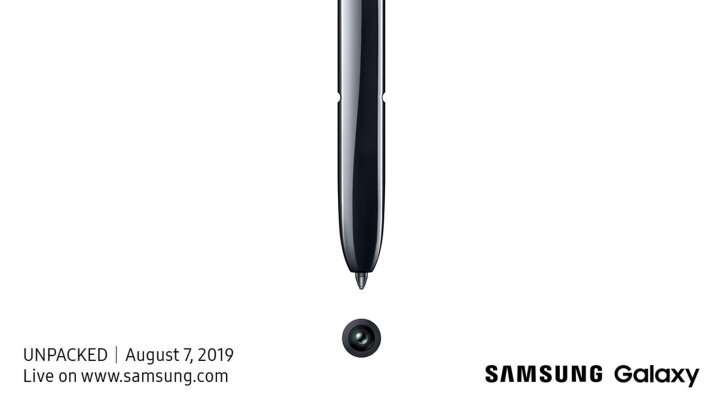 Samsung, the world’s biggest manufacturer of Android smartphones and therefore a direct competitor to Apple and their iOS-powered iPhones, has always made it a point to have new models of their devices ready every year. This particularly applies to their Galaxy line of phones as well as the slightly larger, stylus-equipped Galaxy Notes. This 2019 Samsung has already seen the release of the Galaxy S10 last March. It thus stands to reason that the Galaxy Note 10 will soon follow, but when? If the announcement by Samsung of an unpacking event next month is any indication, then it is soon.

The Verge reports that Samsung has marked August 4 to be the date of its next Product Unpacking event, to be held in Brooklyn at Barclay’s Center. The star of the hour is undoubtedly the Galaxy Note 10 phablet, judging from the imagery of the official promo poster. Said image is the detail of a Samsung Galaxy Note S pen stylus, point down, and a single phone camera lens at the bottom. Taken as a whole the image looks like an exclamation point, which might be a reference by the Korean electronics giant of speculation regarding the Note 10’s features.

Here is where the speculation on the upcoming Samsung phablet, collecting for months now, comes in. There has been a reported leak concerning the positioning of the Note 10’s front-facing selfie camera, a development from the basic Galaxy S10 in March that had a selfie cam lens embedded in the display on the top right. Apparently the Note version will put the cam smack dab in the middle of the screen. There have also been conflicting rumors stating that the classic 3.5 mm audio jack will finally vanish from the Galaxy line starting with this model.

Another leak claims there will be at most four variants of the Note 10, in terms of display size and the presence 5G capabilities. Thus there would be a 6.28 inch and 6.75 inch Galaxy Note 10, and each will get a basic unit and a 5G capable variation.

Other possible topics during the Samsung Unpacking event this August have also been speculated on. There is the matter of the Galaxy Fold hybrid phone-tablet which was apparently already fixed following reports of hinge mechanism problems from the demo units. The company’s co-CEO DJ Koh already owned up to the revolutionary Fold being rushed into introduction. Finally, an official world might also be given on the status of the Galaxy Home smart speaker, still unaccounted for after first being shown last year when the Galaxy Note 9 was first introduced.