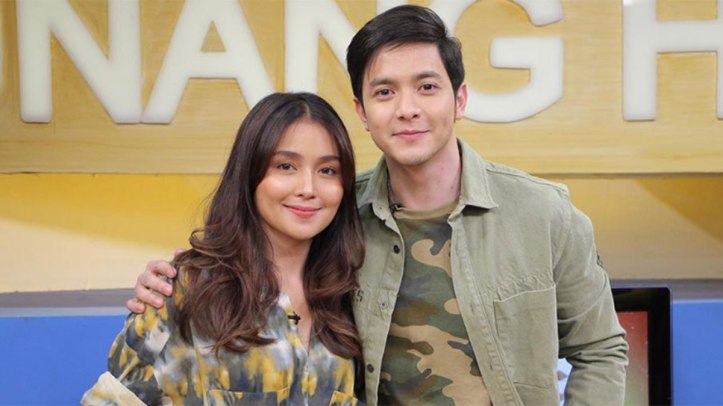 The Star Cinema film “Hello, Love, Goodbye” is coming pretty soon at the end of the month. Much deal has been made regarding the featured love team, each a half of an established showbiz couple and from different networks to boot. But both Alden Richards and Kathryn Bernardo are making it work on and off camera, with the latter taking the former, a GMA7 talent, on a tour of ABS-CBN. There appears to be an imperative on Kathryn’s part to reach out stars from her rival network to discuss future projects with, particularly with one of GMA7’s top leading ladies.

Inquirer.net reports that Kathryn Bernardo has expressed interest in next working with GMA’s Marian Rivera. This was revealed during her reciprocal visit with “Hello, Love, Goodbye” costar Alden Richards to the latter’s home network, where they were guests at the early-morning show “Unang Hirit” which aired Friday, July 12. Bernardo noted that Marian was one of the stars of Philippine showbiz that she is star-struck for, noting that while they have not actually worked together in a film or show, they have met frequently during special events in the industry.

“She went to my debut, I was very happy that time,” Kathryn reminisced about one of her past meetings with Rivera, adding, “For me, she was the most beautiful in the whole world.” And the two have been tied together in a TV show once, even if they never shared screen time nor encountered one another in that production. It was one “Endless Love,” GMA7’s 2010 localization of the 2000 South Korean drama series “Autumn in My Heart.” The then-young Bernardo, on her only appearance in a production for the rival of her home network, played the child version of female main character Jenny Dizon, who would be portrayed in adulthood by Marian Rivera herself.

While Kathryn Bernardo is packaged by ABS-CBN in a powerful love team combination with Daniel Padilla, “KathNiel,” she has so far exhibited surprise character dynamics with Alden Richards, himself one half of a counterpart iconic Kapuso tandem in “AlDub.” Their appearance in “Unang Hirit” comes across as reassurance, following Bernardo and Richards’ ABS-CBN visit, that that was not a pirating attempt for the GMA7 heartthrob. Perhaps the same can be said now for the upcoming project involving Alden’s partner Maine “Dub” Mendoza and Carlo Aquino, also produced by ABS-CBN Films.