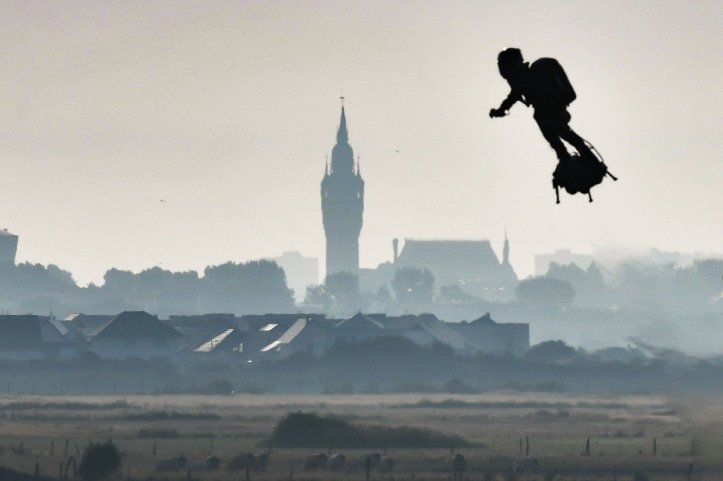 “If at first you don’t succeed, try and try again.” It is probably one of the first and earliest moral lessons one learns in childhood, and one that can somehow apply to every day of one’s life since. Trying again after a failed earlier attempt is something inventors do a lot, from legends like Thomas Edison to present-day pioneers like Franky Zapata and his bulky but powerfully beefy hover-board. Late last month the French inventor of the Flyboard Air put his creation to the ultimate test by trying to cross the English Channel. He failed. On his second attempt last Sunday however, he finally succeeded.

The Verge reports that Franky Zapata would not be denied long in pulling off an English Channel crossing using the Flyboard Air, an independently jet-powered variant of his original Flyboard water-powered “hydro-lifting” craft. Despite the setback of his first try on July 26, aborted after he fell into the water halfway across the Channel, Zapata was only determined to follow through. On August 4 he lifted off from Sangatte, France and made it all the way to Dover, UK, a distance of 22 miles, in the same number of minutes, going 106 miles per hour.

Upon landing in Dover, Zapata issued a statement referring to the original year of manufacture for the Flyboard Air and the time it took to perfect the machine for its historic trip. “We made a machine three years ago,” he remarked, “and now, we’ve crossed the Channel, it’s crazy.” Granted, like with the failed attempt the Channel crossing by Flyboard Air was not continuous; Zapata needed to touch down on a refueling platform to top up his around 10-minute gas supply backpack. This time however he landed on the mark without misjudging the platform and splashing down, unlike last time.

Franky Zapata’s triumph is the culmination of a near-decade of tech development for the Flyboard series, from the first hydro-lifting Flyboard in 2011 to the Flyboard Air back in 2015, the latter of which set a speed World Record a year after its creation, when the inventor took it for a flight across the southern French coast. Zapata being a sport by featuring his Flyboard Air in military parades like Bastille Day 2019 has gotten him development grants from the France armed forces, which seem genuinely interested in finding applications for a man-carrying jet-powered hoverboard.

Historically, the English Channel separating Great Britain from continental Europe has been a favored location for crossing by endurance swimmers and tech advances in sea, air and amphibious craft. As an aerial transport, the Flyboard Air and its inventor-pilot Zapata now join the likes of balloonist team Jean Pierre François Blanchard (France) and John Jeffries (US), and aviation pioneer/fellow Frenchman Louis Blériot in air-powered crossing.