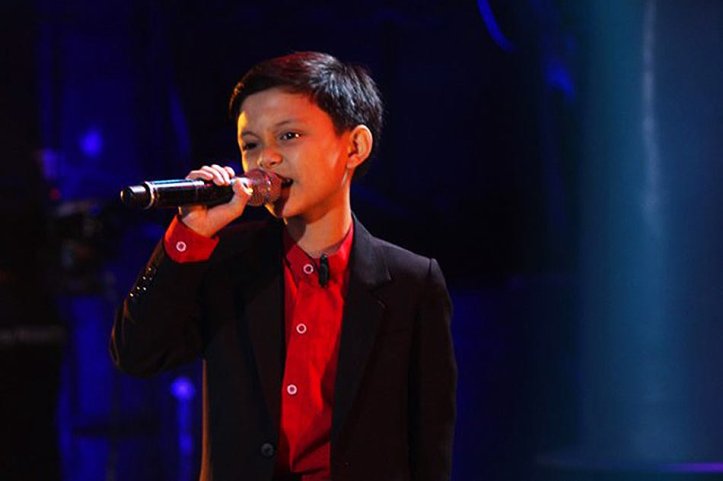 If there is an easily spotted trend happening in the ongoing fourth season of “The Voice Kids” on ABS-CBN, it would have to be the Juan Karlos song “Buwan.” Coaches Bamboo Mañalac, Lea Salonga and Sarah Geronimo (back in her chair after letting Sharon Cuneta handle her spot in season 3) must have heard it being sung end on end in the blind audition phase from so many aspiring young performers. Granted, the soul alternative rock number is not always a guaranteed chair-turner, but when it does work the Coaches who turned are sure to be gushing at the singer, just like with this one.

During the Saturday night episode of “The Voice Kids” on August 24, “Buwan” was able to work its magic for one of the blind auditionees that evening, perhaps because he was bold enough to alter its pitch to catch the attention of the Coaches. And it certainly did, for as the first notes of the meme-worthy chorus, “Sa ilalim ng putting ilaw,” all three of Lea, Bamboo and Sarah turned in quick succession. And for the former two it was a happy reunion of sorts when they saw who was singing that well-used audition piece.

He was 11-year-old Ian Prelligera, and he once tried his luck in the third season of “The Voice Kids” back in 2016, or three years ago. That time Prelligera, who would join Team Sharon, only got as far as the Sing-Offs before being eliminated. From how Bamboo and Lea reacted his singing skills have significantly improved. As for Sarah, who had not been present as Coach on Ian’s previous outing on the competition, was the one to overly fawn on him and make a unique pitch to have the singing wunderkind join her talents. In her words, his second attempt at “The Voice Kids” coupled with her return to active Coaching is fate at work.

But Mañalac and Salonga, who already knew Ian Prelligera from before, held his attention for coaching prospects. Bamboo was all praises at his rearrangement of “Buwan,” while Lea generally focused on the level of advancement from his ability back in Season 3. She spoke of Ian’s swag, saying, “There’s confidence in how you command [attention] and look at the audience.” Ultimately that would be enough to sway Prelligera to join the “FamiLea,” along with the only other successful blind auditionee who chose her for that Saturday night, fellow 11-year-old John Rey Custodio, who sang “Di Na Muli” by Janine Teñoso.