PBA and MPBL Discuss Ways to CO-EXIST Without Unintended COMPETITION 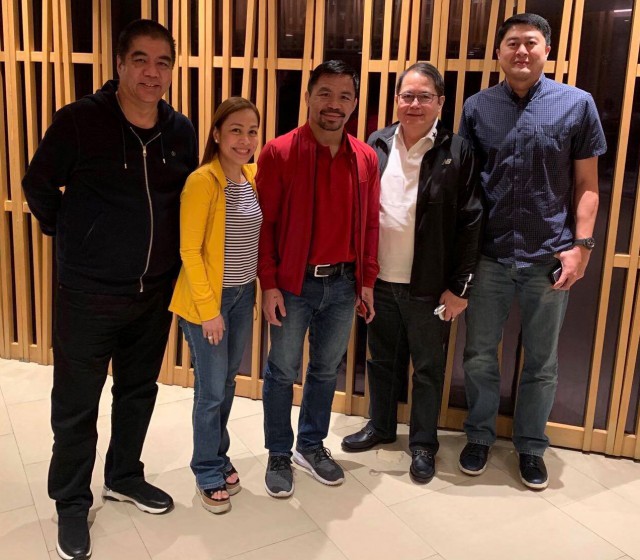 There is no doubt that the Philippine Basketball Association (PBA) is the country’s top professional league for the sport. Such is its indelibility in the Filipino public consciousness that it managed to survive a serious challenger in the late 90s-early 21st Century from the ABS-CBN-founded MBA league. Still, the PBA’s Metro Manila-centered and corporate-sponsored format limits exposure of provincially homegrown talent, though this has been addressed by Sen. Manny Pacquiao’s semi-pro Maharlika Pilipinas Basketball League (MPBL), which has geographically-based teams. While there has been some discussion of issues between the two leagues, relations between PBA and MPBL are mostly cordial, as exemplified by a recent collaborative meeting between their officials.

The Philippine Star reports that in Makati last Saturday, August 23, MPBL chair Sen. Manny Pacquiao met with his opposite number in the PBA, Ricky Vargas along with their league commissioner Willie Marcial, to engage in talks over how the Philippines’ iconic pro basketball association and the relatively young semi-pro league can further help one another in the propagation of the sport without infringing on one another’s activities. The driving theme of their discussion was the fostering of a co-existential relationship between PBA and MPBL.

A point of concern for the Philippine Basketball Association was the possibility of the MPBL to become a new rival pro league like the defunct MBA. To this, Sen. Pacquiao reiterated the core value of the Maharlika Pilipinas Basketball League to remain semi-pro in order to make it accessible for amateur players from outlying provinces to play either as homegrown talent or in a collegiate capacity. The Senator and still-active pro boxer expressed his greater concern for keeping betting and gambling to form over MPBL games, conferences and related trends. This was affirmed by Maharlika Commissioner and ex-PBA great Kenneth Duremdes, who was also present at the informal Saturday meeting.

With regards to Maharlika Pilipinas not trying to steal the Philippine Basketball Association’s professional thunder, Duremdes remarked, “Our thrust is to develop homegrown players…We’re giving the opportunity for homegrown players to showcase their skills so they can be discovered.” He noted that the serious amateur Filipino basketball player aspires to make it to the PBA and that playing experience in an organized if not-entirely pro league like the MPBL was the ticket for developing themselves. Maharlika however has instituted regulations prohibiting active MPBL players from moving to the PBA until they have finished the current season on their home league.

Standing PBA regulations in turn mandates that all PBA draft aspirants must play a minimum seven games (nine if Filipino-foreigners) in the league’s in-house D-League in order to be eligible for drafting. This applies even if the player has established his skills in the MPBL. An unofficial ruling also states that a PBA player switching to the MPBL can return to the league with the year, but only once, before losing eligibility to play PBA.