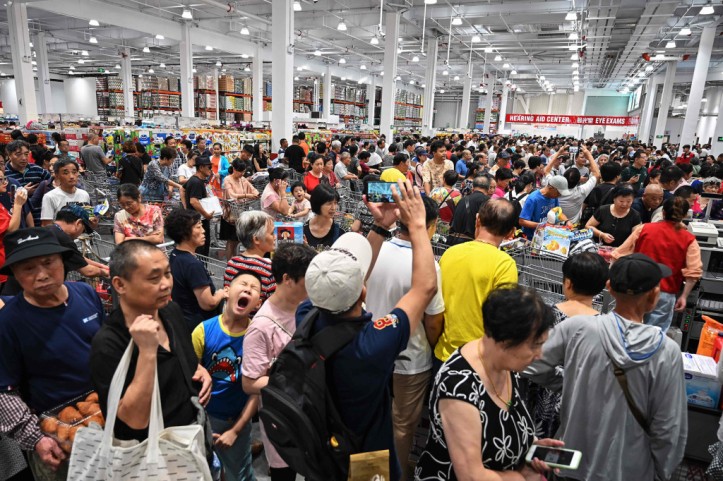 Warehouse clubs as a concept began in the US back in around 1971, though earlier examples have been recorded in the fifties. These are massive retail stores that allow wholesale purchases of merchandise, particularly to customers that pay for membership fees to be allowed entry to shop. Numerous examples of warehouse clubs have come and gone over the decades. One that has stood the test of time since its opening in 1976 is Washington-headquartered Costco, its current form a result of mergers with previous competitors. The retail giant currently has stores in 12 countries, the latest being in China, which opened this Tuesday. And what an opening that branch had.

CNN reports that the first ever Chinese Costco physical store, which opened in Shanghai on August 27, has proven very popular with Chinese shoppers. How popular? It was the scene of unprecedented chaos as customers filled the outlet to way beyond capacity that shoppers with cars had to wait for hours to get a parking lot spot, the local police was forced to do a maximum deployment to the scene for maintain peach and order, and ultimately Costco Shanghai just opted to close shop early.

From the moment that Shanghai residents were milled around the new Costco on Tuesday morning, it was clear that there was going to be trouble in controlling them. Such was the impatience of certain customers that they practically crawled under the store’s roller doors to get inside, as caught on very candid camera-phone footage. Once they were inside, the shoppers pretty much picked the place clean, taking any merchandise that was not nailed down and filling their grocery carts. The famous Costco rotisserie chicken section was swamped with buyers and sold out before the clerks even knew what hit them. And that was just inside.

Outside, traffic jams ensued as more motorists lined up to try parking at the Shanghai Costco parking lot, and they were not dissuaded by notices that the waiting time for a space could average three hours. The Shanghai Police mobilized to help control the crowds, even blitzing their official Weibo social media page to encourage potential shoppers to follow store and police orders as well as behave rationally. No instructions seemed to stick, so Costco decided to close during the afternoon. In their own Chinese social media statement, the store announced plans to enforce a max customer headcount of 2,000 inside store premises starting Wednesday, August 28, until the opening day hype hopefully calms down.

Before Costco, fellow US retail household name Wal-Mart has already established its own Chinese footprint with over 400 locations. After Shanghai, the next overseas store opening for Costco is in New Zealand, opening in 2021.