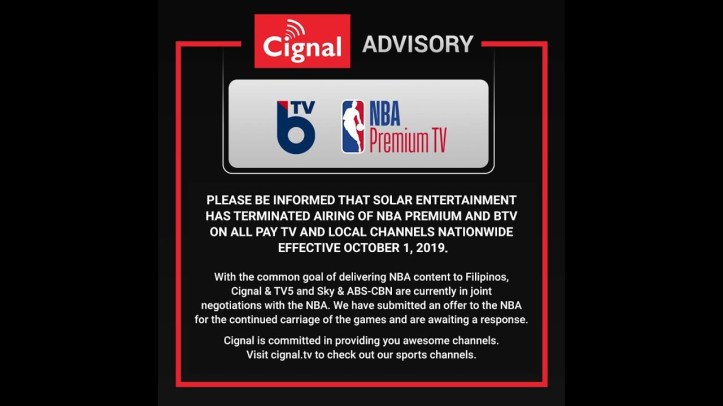 Perhaps one of the biggest perks for Philippines to invest in a subscription to traditional cable or satellite television, especially if one is a sports fan, would be the sports programming and channels that are part of the standard cable or satellite channel lineup. And when it comes to particular sports, none could fire up Filipinos like basketball, so having NBA games on pay TV can be considered a blessing for many. For years, NBA fans in the country would rely on providers like Sky Cable and Cignal to deliver their games. But at the start of this month no NBA coverage could be had.

Inquirer.net confirms the bad news for Filipino NBA followers in that major carriers of the American pro basketball league’s games, namely Sky and Cignal, no longer carry NBA Premium and the basketball-oriented Balls (BTV). These channels now have glaring announcement screens on their respective platforms that greeted Cignal and Sky subscribers beginning Tuesday, October 1, much to the consternation of NBA fans across the Philippines. This is because NBA programming is sold to these platforms by Solar Entertainment, which held the license to do so from the NBA itself, until the agreement expired by October.

This can spell bad news for followers who are looking forward to the start of the regular NBA season later this month. For the moment league-related programming would be warm-ups and exhibitions, like the one between the Houston Rocket and Shanghai Sharks that would have been viewable on Sky and Cignal this Tuesday if not for what happened. Subscribers do have the option of turning to the internet where NBA games remain available, but it is not an ideal choice if net speeds are slow. For the moment however, fans are in limbo as the licensing crisis sorts itself out.

While the National Basketball Association’s Philippine distribution license to Solar Entertainment has run out, Sky Cable and Cignal are not going to wait for Solar to re-establish the deal from their end. Rather, these two companies have decided on a joint venture to directly get broadcasting license from the NBA itself, for the sake of an estimated “millions” of the league’s fans in the Philippines. “We have submitted an offer to the NBA and are awaiting a response,” the country’s top cable and satellite TV giants have said in a combined statement. Fans will have to wait if such a deal can be finalized before the season starts October 22.