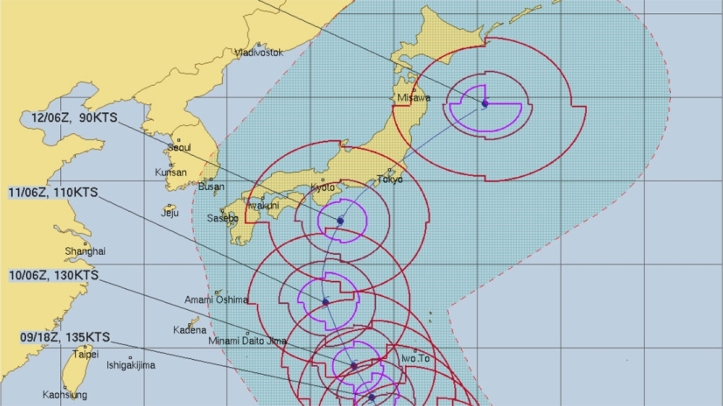 A few months back it was an accepted fact that the Philippines was playing host to one weather disturbance after another, from tropical depressions to fully-formed typhoons. Many of this year’s batch of Pacific weather anomalies have done everything from making landfall and passing through parts of the country, to just traversing the Philippine Sea within the Area of Responsibility and moving on to Japan, Taiwan or mainland China. Now, the latest official typhoon of 2019 has bypassed the PAR completely, ironically despite having an international name familiar to Filipinos: Hagibis. It is instead barreling towards Japan, after becoming a super typhoon for the longest duration of all this year.

CNN reports that Hagibis, the ninth recorded typhoon-level weather disturbance in the Pacific this 2019, and the third to be classified as a super typhoon, has now established a record of being the longest-lived of those super typhoons so far this year. It has been ranked as such for 60 hours, and will likely gain more time until it makes landfall and possibly downgrades. Measurements by the Joint Typhoon Warning Center (JWTC) have Hagibis with an eye 55 kilometers wide, sustained winds of 195 km/h and gustiness of 280 km/h.

Typhoon tracking has confirmed that TY Hagibis will hit Japan sometime this weekend. Already the JTWC is estimating that the center of the super typhoon will either pass very close or go directly over Tokyo, the capital. This is going to be bad news considering that Tokyo had just brushed off Typhoon Faxai last September, causing $7 billion in damage to the Japanese economy and killing three persons to boot. The fact that Hagibis will have the comparable strength of a Category 2 hurricane from North America upon reaching the metropolis is very worrying for residents, especially as its course seems to be following Faxai’s.

Path projections for Hagibis have it moving in a north-northwesterly direction towards the main Japanese island of Honshu until this Thursday, October 10. Come Friday, October 11, the direction will shift to the north-northeast, which is how the super typhoon will pass within proximity of Tokyo. According to CNN meteorologist Monica Garrett, Hagibis will spend Saturday and Sunday moving through central Japan, causing “deteriorating conditions” and over 250 millimeters rainfall. In the worst case, it will force the country to cancel some games for the ongoing 2019 Rugby World Cup.

Hagibis, which shares its name with the famous disco group nicknamed the “Village People of the Philippines,” has nothing to do with the country anymore. Nonetheless, weather agency PAGASA notes that if it had entered the PAR this week, it would have been named “Perla.”