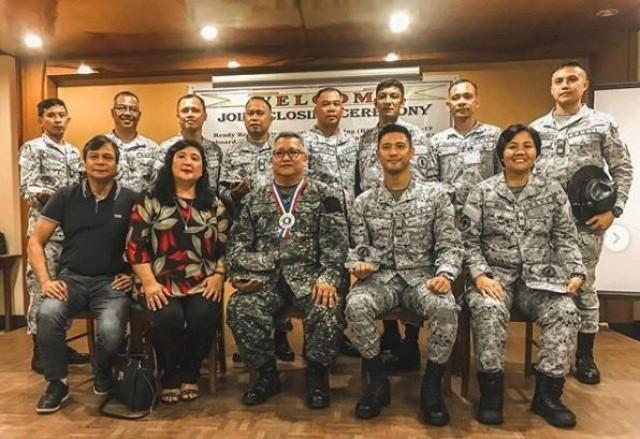 The Philippine showbiz community and fandom back in June were quite impressed when actor Matteo Guidicelli pushed his April 2019 reservist status in the Philippine Army even further by undergoing Scout Ranger training, a voluntary action as part of the Army’s leadership development course so he can better prepare himself on the off chance that he be called to serve the country. A number of other celebrities have taken steps to enter military reserve units of the Armed Forces (AFP). While Guidicelli was a Kapamilya star, a Kapuso counterpart has risen to the challenge in actor Rocco Naccino, and he is now a naval reservist.

The Manila Bulletin reports that GMA7 star Rocco Nacino had this past weekend taken his oath as part of the reserve corps of the Philippine Navy, with the rank of Petty Officer 3rd Class (PO3). The ceremony was held at the Bonifacio Naval Station BTC Hall, where Nacino was accompanied by his parents who would pin his petty officer rank badge. They were then featured in a photo that the Kapuso actor shared on his Instagram page, where they posed for a group photo with his fellow newly-minted naval reservists.

So this happened today. Oathtaking and Official Donning of Ranks at the BTC hall of Bonifacio Naval Station. PO3 Enrico Raphael Q. Nacino, PN(Res) , reporting for duty! Para sa inyo ito, Col. Eleuterio R. Quiogue and Nanay in heaven, and to my loving parents who cleared their schedules to pin my rank on me. Hooyah! #PhilippineNavy

“PO3 Enrico Raphael Q. Nacino, PN(Res), reporting for duty!” crowed Nacino in the caption for his Instagram entry over the weekend. “This is for you, Col. Eleuterio R. Quiogue and Nanay in heaven, and to my loving parents who cleared their schedules to pin my rank on me. Hooyah!” The Navy Reserve oath-taking that Nacino attended serves as a small respite for the GMA talent before he resumes promoting his upcoming film in the Metro Manila Film Festival from TBA Studios. The movie, “Write About Love,” is yet another cinematic production featuring a collaboration between stars of GMA and ABS-CBN, where Nacino stars alongside Miles Ocampo, Yeng Constantino, and Joem Bascom of the Kapamilya camp.

On an interview regarding “Write About Love,” Rocco Nacino spoke of how nice an opportunity he got to work with Ocampo, as well as having to put his best foot forward in the movie production for being the sole Kapuso among the main cast. He also praised the hands-on directing style of Crisanto Aquino, which he credits for making the filming “a breeze.” This film and his recent confirmation as a Navy Reserve PO3 are all shaping up to be great ways to end the year for Nacino. “Write About Love” from TBA Studios will premiere with the rest of the 2019 MMFF entries starting on Christmas Day, December 25.