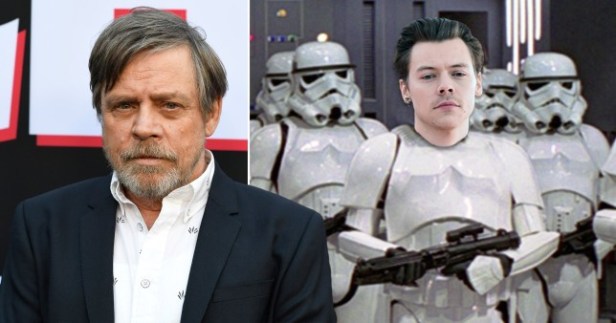 Following a world premiere in Los Angeles this Monday, the final installment of the primary “Star Wars” saga that started all the way back in 1977 will be officially released this Friday. “The Rise of Skywalker” from Lucasfilm has had its work cut out for it, to uplift the franchise following the divisive reaction of its predecessor “The Last Jedi,” directed by Rian Johnson. The return of “The Force Awakens” director J.J. Abrams hopes to stir the story back to a properly uplifting conclusion. But while the premiere clock ticks down, actor Mark Hamill has hinted that a new celebrity has made a secret cameo.

Since the start of the “Star Wars” sequel trilogy in 2015, there has been plenty of behind-the-scenes discussion following the reveal that some notable personages have made cameos in the films by dressing up as fully-armored and helmeted Stormtroopers. According to CNN, franchise star Mark “Luke Skywalker” Hamill posted on his official Twitter page what appears to be a rather obvious hint on which star of sorts has played the “Secret Stormtrooper” for “The Rise of Skywalker.” If his words are on the level, then former One Direction member and sometime-actor Harry Styles was in.

Hamill’s tweet referenced the two major celebrity Stormtroopers who were in the prior two “Star Wars” episodic movies produced by Lucasfilm as a Disney subsidiary. There were accompanying photos of Daniel Craig (the Mind-Tricked Stormtrooper from “The Force Awakens,”), Princes William and Harry (part of First Order mass-trooper shots in “The Last Jedi”), and Tom Hardy (also on “Last Jedi” but had his scene cut). Then he mentions how there have been no singers to put on the white armor yet, but clues to the latest secret Stormtrooper identity apparently point only in “One Direction.”

Tonight #TheRiseOfSkywalker Premiere finally brings closure to my dysfunctional family! Wonder who'll be the #SecretStormtrooper in this one? Considering they've all been UK Superstars (2 Royals+2 Actors) but still no singer, all the clues point in one direction: #Stylestrooper🇬🇧 pic.twitter.com/aDn2xYUEqK

Now, it would be hard to confirm what Mark Hamill posted on social media until more people have seen “Star Wars: The Rise of Skywalker.” Still, the possibility that Harry Styles, who has proven some acting ability of his own in a supporting role for Christopher Nolan’s “Dunkirk” in 2017, had indeed  agreed to play Stormtrooper for this, the final chapter of the so-called Skywalker saga of “Star Wars.” The venerable Hamill reminded fans in subsequent Twitter posts to keep the secrets of the film to their chests for now, and not spoil things for the rest of the fandom.