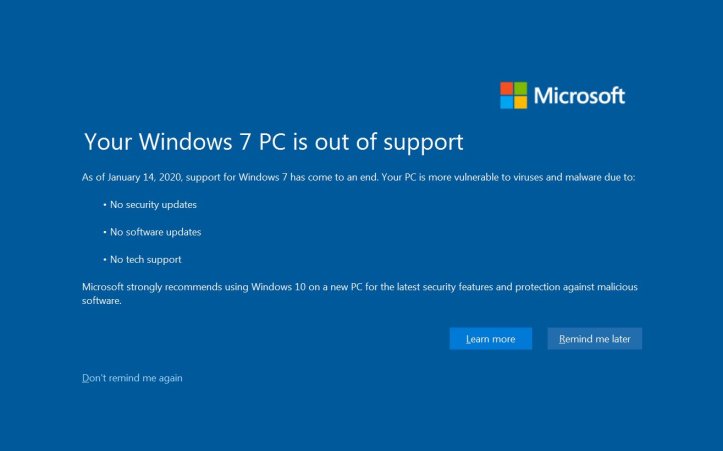 On July 22 back in 2009, Microsoft released a new PC operating system as a successor to its then less-than-3-year-old Windows Vista. This was Windows 7, one of the most successful Windows OS versions in its development history. It was praised by users for fixing certain shortcomings perceived in Vista, and praised for its incredible visual presentation. It was no surprise that Win-7 managed to remain ubiquitous even in the wake of its own follow-up, Windows 8 and 8.1; even Windows 10 took several years to become more common than 7, and that is because its support period was ending.

As The Verge tells us, Microsoft has now officially ended all technical support for their Windows 7 computer operating system, over a decade after its introduction. To be specific, what had ended was the extended support phase for Win-7 which was terminated on Tuesday, January 14. Mainstream support for this still-prominent OS already ended four years ago, on January 13 of 2015. For all intents and purposes, Microsoft is no longer mandatorily doing anything in official capacity for Windows 7, meaning its security features and systems will no longer be automatically updated. That will leave Win-7 computers with increasing vulnerabilities.

Now, this does not mean a complete end to Microsoft keeping their now three-versions-behind OS viable. They will still be offering extended security updates for users who still have Windows 7 on their computers. However these measures must be paid for. Depending on what edition of Win-7 is concerned, users might have to pay from $25 to $50 per machine this year (2020) for the security updates, and the charges will automatically double by next year (2021) and for every succeeding year thereafter. Microsoft is offering users with already-registered Windows 10 computer accounts to have free “post-retirement” updates on their computers which still run Win-7.

Windows 7 counts among the very last Microsoft operating systems that are released as-is, in distinct versions with occasional upgrades that become obsolete with the next numbered OS released. The trend has been changed with Windows 10, which is being marketed more as a “service” rather than a software product, with period “build” updates while retaining the Win-10 identity for years on. Though even with end of support, Windows 7 continues to be present on nearly 28% of traditional PC devices as of November 2019. It is expected to stick around for some time yet.