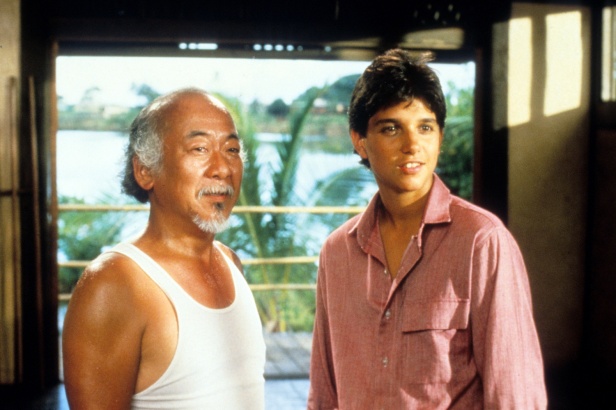 One of the best movies of the 1980s that tick off the boxes for “coming of age,” “underdog,” “sports competition” and “all-ages action” would most definitely be 1984’s “The Karate Kid” from Columbia Pictures (now under Sony). Its story of a bully magnet being taught karate by a wise if unconventional sensei became a definitive plotline in other stories across various media. “Karate Kid” itself became a modest franchise with two follow-ups, an animated series, two spinoffs, and distant sequel web-series “Cobra Kai” on YouTube Premium. But that franchise will be expanding anew, as the original “Karate Kid” film gets adapted…into an upcoming Broadway musical.

Comic Book Resources tells us that indeed, “The Karate Kid” film that inspired eighties moviegoers with the story of Daniel LaRusso and his teacher Mr. Miyagi, is being adapted for the theatre stage and given music numbers to boot. The musical adaptation is being overseen by the actual screenwriter of the original movie, Robert Mark Kamen, working with the Kinoshita Group, Michael Wolk and Kumiko Hoshii. With a surprising and respectful level of Japanese involvement, the musical will be directed by Amon Miyamoto, with music and lyrics by Drew Gasparini.

Kamen confesses that he had never thought his original one-off film production would become as well-loved and still-remembered in the present by multiple generations. “Beyond my wildest dreams did I think what started out as a love letter to my devotion to Okinawan Karate and the man who taught me would become a full-blown Broadway musical,” he says. “And here is hoping that what comes to the stage brings the same joy and relevance ‘The Karate Kid’ has brought to countless kids and their parents for the past 35 years.”

To realize this vision that Robert Mark Kamen sees for the “Karate Kid” musical, he has taken onto the production staff choreographers Keone and Mari Madrid, and set designer Derek McLane. All are either award nominees or actual winners, with Keone and Madrid having been nominated in the MTV VMAs, while McLane’s design for “Moulin Rouge!” has gotten a Tony.

The director Amon Miyamoto reveals great insight in talking about his excitement in working on this musical, about how the message of “The Karate Kid” is very appropriate for the modern contemporary world that is both globalized yet increasingly divided by hostility. “The sweet contradiction of ‘The Karate Kid’ is that the real nature of karate is, as the show says, ‘not for attack.’” Notes Miyamoto. “Not to hurt, not to win, but to let opposing energies play out and come in grace to a conclusion that allows dignity and respect for all.” No casting or premiere date has been given for this musical yet.