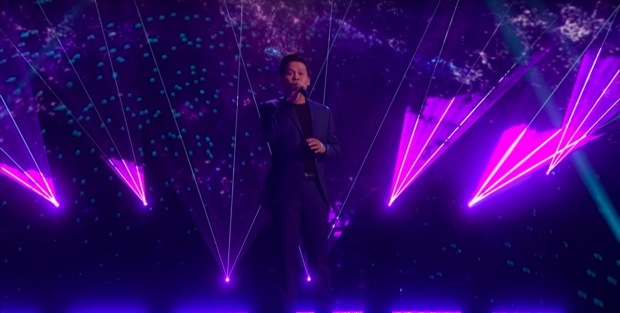 This Sunday evening, even as ABC was televising the ceremony of the 92nd Academy Awards, NBC was airing a conclusion of its own, for the second season of their special-edition “America’s Got Talent: The Champions” reality talent competition. With the finale happening this week, the remaining performers that were voted on by judges and “Super-fans” to advance are now preparing to put their best foot forward to overcome the others and be named the “Got Talent” grand champion. Among them is Marcelito Pomoy, “PGT” veteran and dual-voice singer. And while he has been advised that his talent is not so surprising now, he has channeled it again one more time.

ABS-CBN News reports that “America’s Got Talent: The Champions” finalist Marcelito Pomoy has let it rip again with his wonderful falsetto singing for the finals of the special-edition competition. On his semi-finals appearance judge Simon Cowell suggested that he tried to do something new aside from his twice-done one-person duets that have caught viewers by storm, “The Prayer” during the preliminaries and “Time to Say Goodbye Now” for the semis. While sensible advice, the “Pilipinas Got Talent” season 2 winner decided to stick with his strongest point for the finale.

On his last performance, Pomoy decided to bring his dual-voice to bear with the Disney classic theme ballad “Beauty and the Beast” by Celine Dion and Peabo Bryson. Said choice has been one of the popular options proposed by Pinoy netizens on social media for Marcelito to sing in the finals. And he did not disappoint; with a greater frequency of voice-switching on his part than ever before, the ensuing performance from Pomoy once again sent the audience and judges to their feet, bar Simon. In contrast to the latest round of gushing praise from Heidi Klum, Howie Mandel and Alesha Dixon, the notoriously prickly judge was subdued this time.

While reaffirming Marcelito Pomoy’s talent, Simon Cowell remarked that his choosing to perform a third duet, and of another familiar song, robbed the Filipino champion of a chance to be unpredictable now that his ability is no longer a surprise. The other judges and the audience did not agree with his assessment, but now the final decision will be up to the viewer votes this time, with Marcelito being just one of ten finalists vying for the grand champion title. “America’s Got Talent: The Champions” season 2 concludes Monday, February 10 (US time) on NBC.