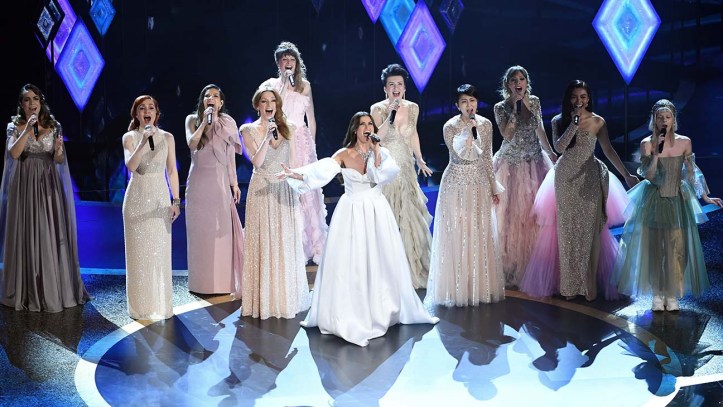 Disney’s 2013 animated film “Frozen” was highly regarded not just because of its clever reworking of fairy-tale clichés (like how “true” love does not have to be a romantic partner), but also for its great soundtrack and song list. The latter part also crossed into major annoyance however, thanks (or no thanks) to the notorious “Let It Go” sung by Idina Menzel as Queen Elsa. Some fans hoped that the planned sequel could feature a song that would finally banish “Let It Go” from the minds of many, and 2019’s “Frozen II” might not have disappointed with Menzel’s new signature song number, “Into the Unknown.”

As a nominee for Best Original Song in the recently-held 92nd Academy Awards this past Sunday, “Into the Unknown” from Disney’s “Frozen II” was performed by Idina Menzel during one of the ceremony’s intermissions. But as MTV tells us, that number was far more epic than anyone could have ever imagined. As expected, Menzel was front and center on the Dolby Theater stage, with Norwegian singer Aurora (who provides the song’s haunting “Ah-ah, ah-ah” hook) in a raised portion behind her. The big shock came on after the first refrain, when several other singers joined Idina in a multilingual melody.

Ideally that was how it should have happened. But keen listeners would note that Idina Menzel was sort of rushing her lines, to the point that at the final portion of “Into the Unknown” it seemed she was a line or two ahead of the other performers and even the music. Whether it was a mixing error or Menzel felt she was pressed for time, only musical mavens might know. Ultimately however, the “Frozen II” song was beaten out of the Best Original Song category by “I’m Gonna Love Me Again” from the Elton John biopic “Rocketman,” credited to the man himself and Bernie Taupin.

Other notable performers during the 92nd Academy Awards include Eminem with “Lose Yourself” from the film “8 Mile.” He notably did not perform this song when it was nominated (and won) in the 75th Oscars in 2003, believing it had not chance at Best Original Song. Recent Grammy Awards darling Billie Eilish sang the Beatles’ “Yesterday” during the 2019 “In Memoriam” segment of departed celebrities. Elton John also performed his winning Best Original Song onstage.

Look, if you had another shot, another opportunity… Thanks for having me @TheAcademy. Sorry it took me 18 years to get here. pic.twitter.com/CmSw2hmcZo