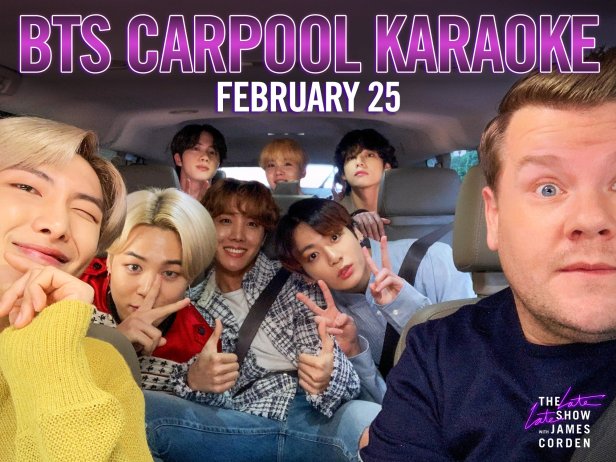 James Corden of “The Late Late Show” on CBS has got some pretty popular segments on his evening talk show. One of them is “Carpool Karaoke,” a skit where Corden picks up a celebrity (or a bunch of them) in his car, then has them singing to several songs while on the road (as it were), with music artist passengers likely to sing their own songs. The guests have ranged from the cast of “Hamilton” to Michelle Obama, with the atmosphere ranging from pure hilarious fun to bittersweet (like the episode of the spinoff Apple TV series that featured Linkin Park before the 2017 suicide of their vocalist Chester Bennington).

And as The Philippine Star has it, the latest musical sensation soon to belt out karaoke songs aboard James Corden’s car will be one – or make that seven – reasons for the international K-Pop community to go a little nuts. Yes, K-Pop, because South Korean boy band BTS will be the attractions on “Carpool Karaoke” for “The Late Late Show with James Corden” on Tuesday next week. Corden himself blasted the big news with a quirky promotional image on his Twitter page, showing the familiar car interior with him and BTS.

The announcement by Corden of the “Late Late Show” episode with the BTS “Carpool Karaoke” segment fell on Tuesday, February 18, which is also a meaningful date for the group considering that it is the birthday of their member (and primary dance guy) Jung Ho-seok, or “J-Hope”(or also “Hobi” to his specific fanatics in the BTS “ARMY” fan club). Social media reactions to the guest announcement were also full of commentary on how the episode might proceed, ranging from “mundane” rapping by the BTS members, to Corden probably struggling to sing in Korean, to lead vocalist Kim “V” Tae-hyung potentially sticking his head out the window to scream some lyrics.

BTS is also making some history in this talk show segment for being the first K-Pop act to be there. That could likely lead to greater attention beyond the ARMY and even the general K-Pop fandom, for how momentous BTS doing “Carpool Karaoke” with James Corden could be. The episode premieres February 25 on CBS.