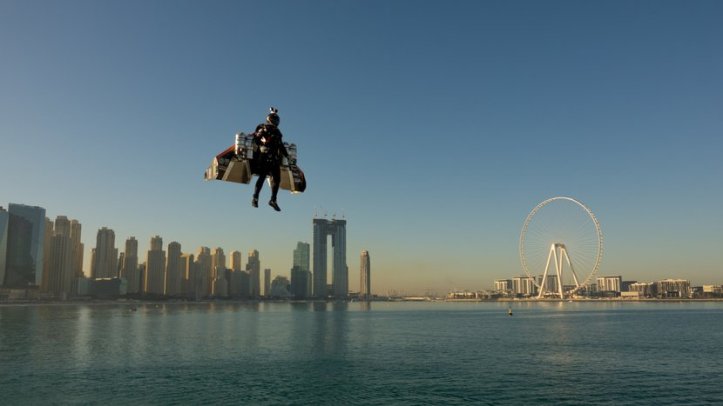 Flying vehicles are a mundane sight in our modern world, but even with the advances in aircraft, helicopters, gliders and many more. But there are still the romanticists who dream of practical personal means of flight, with devices either ridden upon or worn on the person. Franky Zapata was a poster boy of the former method, developing his originally water-powered Flyboard sea ride into a hoverboard with which he crossed the English Channel last year. Of the latter, more fantastical mode, there is Vince Reffet, who recently has launched in a prototype winged jetpack from a starting position in the ground, to flying over Dubai.

The Verge tells us that aviation enthusiast and jetpack co-developer Vince Reffet has been documented taking a jetpack design through its paces by flying across the sky over one of the major cities of the UAE. Reffet has a locally-based firm, Jetman Dubai that has been making further developments on the jetpack design that he collaborated on with Swiss pilot Yves Rossy. The flight, which took place February 14, was recorded and uploaded on Jetman Dubai’s YouTube channel, where it was described as preview for an expo to be held in the UAE this year.

According to specifications listed in the video description, Reffet’s jetpack needed only eight seconds to carry him from his starting position on an elevated platform in the water to a height of 100 meters. By the time the timer read 12 seconds he was 200 meters up; 500 meters at 19 seconds, and a thousand feet high after a half-minute. Ultimately he reached a height of 6,000 feet and travelled across the Dubai skyline at 130 knots average. Reffet needed only his body movement to control the orientation of the jetpack in midair, and he was able to do stunts like aerial loops as such.

In conclusion, Jetman Dubai noted in the video description that “It is the first time that a Jetman Dubai pilot could combine hovering safely at a limited altitude and flying aerobatics at high altitude in the same flight.” Granted, the whole mechanism was running on limited fuel to maintain its thrust; as a result Vince Reffet did not “land” his jetpack under its own power but rather parachuted back to earth when the propulsion ran out. Reffet’s Jetman flight system looks to be shaping up as a major attraction for Expo 2020 in Dubai, the first global exposition in the Middle East, which will run from October 20 this year to April 10 of 2021.