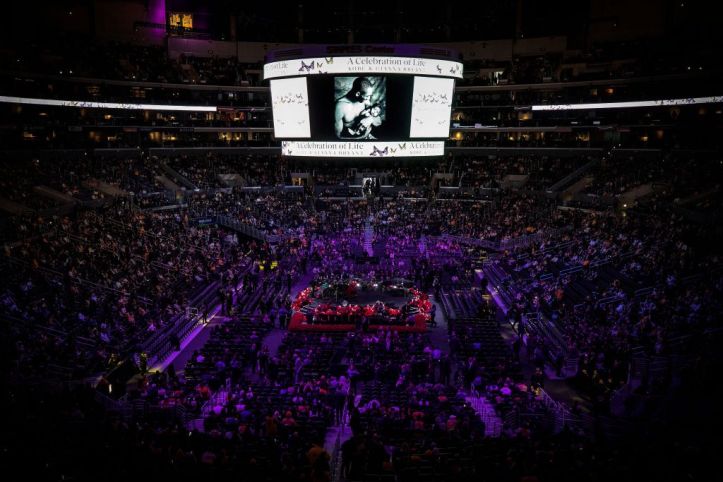 Owing to the massive celebrity star power he had garnered throughout his life, it was understandable that the surviving family of retired LA Laker and legendary NBA player Kobe Bryant decided to hold a private funeral service and burial for him and his daughter Gianna this early February, short of a full month after their accidental deaths in a helicopter crash in January 26. But it would do a disservice to fans if they never got to pay tribute to his memory. Thus a special memorial service was tendered to Kobe this Monday morning at the Lakers’ home, Staples Center.

NBC Sports reports that the “celebration of life” memorial for the late Kobe Bryant on February 24 was celebrated with the appropriate somber mood from the lucky thousands of fans who joined family and friends at Staples. The decision to make it a ticket-only event for the general audience helped to give the proceedings a quiet atmosphere, the better to hear the many testimonies offered to Bryant and his daughter by those who knew them, as captured for posterity by the fans and media people, both groups being neatly separated from one another by barricades.

Those who officiated and spoke at the memorial for the Black Mamba of basketball were striking in their appropriateness for the occasion. Jimmy Kimmel was master of ceremonies, and again shared the heartwarming friendship moment between him and Kobe from their early days in Los Angeles. Testimonies were offered from greats in the NBA and its sister league the WNBA, the latter represented by Sabrina Ionescu and Diana Taurasi. But it was definitely the NBA speakers who got the most attention: Shaq and Michael Jordan gave touching tributes to their departed contemporary. Jordan especially referred to Bryant as his “little brother” in the league, though he also livened up the mood with his reference to a new “crying Jordan” meme.

Featured performers of the night alternated between the speakers, with Christina Aguilera, Alicia Keys and Beyoncé giving their own musical tributes to Kobe Bryant. But it was the address by his widow Vanessa Bryant that got the assembly riveted. She spoke of her regrets at not seeing her daughter Gianna married, but is comforted by how her husband’s legacy has touched many and inspired them to be better. It was a touching moment considering how Mrs. Bryant has kept her privacy in the weeks following the tragic incident last month.