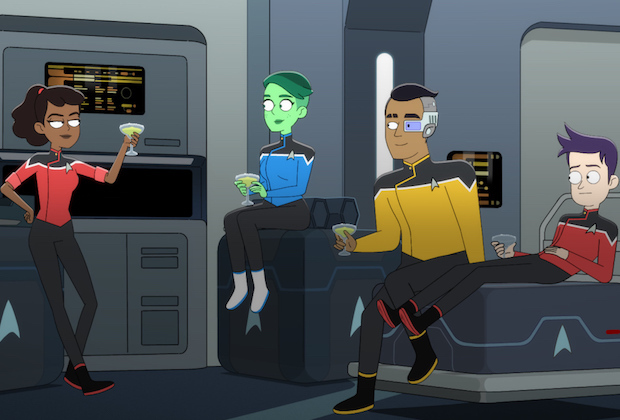 Longtime fans of iconic sci-fi franchise “Star Trek,” whether they go by the nickname of “Trekkie” or “Trekker,” know just what the general beats of this massive multi-entry property are: the collective adventures of a brave multinational and multi-planetary crew of space explorers on a starship or space station, amidst the political maneuverings of galaxy-spanning nations as well as the unknown and unexplored frontiers. Normally that means following the viewpoint of the ship’s captain and the bridge crew. But a ship usually has a crew of anywhere from over a hundred to over a thousand. What is life like for the rest of these personnel?

That question gets answered in a hilarious and animated fashion thanks to a new upcoming cartoon series on CBS All Access according to Variety. “Star Trek: Lower Decks” is a good-humored sendup to those fleeting one-scene random crewmembers of many a Federation starship that do not get prominence like the bridge heroes. Even better, it will come out next week courtesy of creator Mike McMahan, who has served as writer-producer for Cartoon Network’s “Rick and Morty” and even been part of the animation team for “South Park” and “Drawn Together.”

A trailer released on Sunday, July 12, introduces Trekkers and other interested viewers to the zaniness that can be expected of a “Lower Decks” series for “Star Trek” crews. The action happens in 2380, aka the 24tH Century when “The Next Generation” and related series takes place. But the setting starship, USS Cerritos, is flat-out described as one of the least-important vessels in Starfleet, which means its crew of non-essential personnel is even more unlikely to see exciting action over the bridge crew, which is played for plenty of laughs.

“Star Trek: Lower Decks” will feature the voices of Tawny Newsome and Eugene Cordero as Cerritos ensigns Mariner and Rutherford, who try to pass their non-vital duty hours goofing off like in pretending to record Captain’s Log Entries. They hang out with fellow ensigns Tendi (Noell Wells) and Boimler (Jack Quaid) even as they try to get some spotlight away from the command crew of Captain Freeman (Dawnn Lewis), First Officer Ransom (Jerry O’Connell), Engineer Lt. Shaxs (Fred Tatasciore) and Caitian Dr. T’Ana (Gillian Vigman).

“Lower Decks” will premiere with a 10-episode season, coming to CBS All Access this August 6. It joins currently-active “Star Trek” series such as “Short Treks,” “Discovery” and “Picard,” the latter two in between seasons.