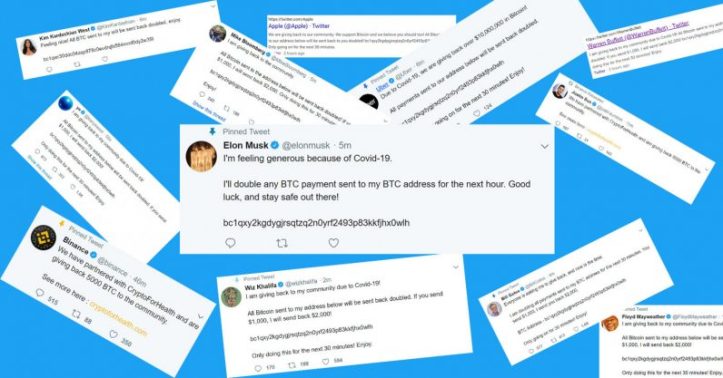 The concept of social media, manifest today in the prominence of platforms such as Facebook, Twitter and more, has brought both benefits and problems to the online community over the years. On the one hand there are the ease and variety of communications plus the formation of internet communities; on the other hand, it has opened a new venue for vicious targeted attacks on specific persons for their beliefs or opinions, often with the perpetrators able to hide behind anonymity. On the extreme end of that are the damaging cyber-hack attacks that are extremely dangerous for both users and platforms.

As The Verge tells us, top micro-blog and social network Twitter was the unfortunate target of a massive hacking effort that struck at the accounts of many high-profile individuals and major companies. This took the form of blitzing the affected accounts with tweets trumpeting of a bit-coin scheme – or scam, rather – that lasted just over two hours of Wednesday, July 15 from 4 PM ET. It had actually gotten to the point that Twitter support was forced to disable the tweeting function of a great many more accounts, not lifting the posting ban until evening local time on 8:32 PM.

Such a brazen cyber-attack on one of the most-used social media platforms in the world has raised all sorts of alarm, especially considering the identities of the account-holders that were affected by the bit-coin scam. First to be compromised was the Twitter page of Tesla CEO Elon Musk, then that of Microsoft founder Bill Gates. Other victims include the accounts of former US President Barack Obama, former VP (and Democratic candidate) Joe Biden, former Mayor Mike Bloomberg of NYC, Amazon boss Jeff Bezos, Kanye West, and corporate pages such as those of Apple and Uber.

We are aware of a security incident impacting accounts on Twitter. We are investigating and taking steps to fix it. We will update everyone shortly.

Theories have been put forward as to how the hacker – individual or group – managed to turn a significant portion of Twitter into his personal machine for a bit-coin scam. One possibility is that the perpetrator discovered a security loophole for the platforms login; another is that he/they might have gotten access to Twitter admin privileges. That might explain the extreme measure of the company to block tweeting capabilities on the platform, at least for verified accounts. Twitter support also advised that they might have had to disable password resets while they were fixing the damages.

Regarding the BTC address that the hacker included in his spam posts, a look at the publicly-accessible transaction records reveals that at some points the scammer has conned enough people on Twitter to make at least $120,000 worth in bit-coin.

Image from The Next Web