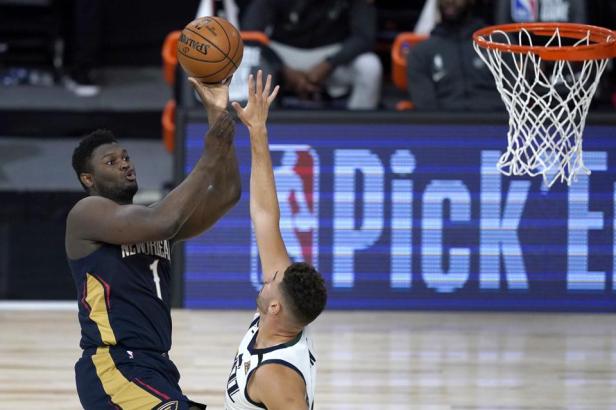 It was an idea that was solidly about steely determination tinged with a bit of desperation to get something done before the year runs out. Following the March 11 suspension of the 2019-20 NBA season, the league was single-mindedly looking for a way to get games restarted in mid-year or so in order to get a championship series going before 2020 ends. The result was the “NBA Bubble” isolation zone in Walt Disney World where teams, coaches and staff could practice and later compete while screened from possible COVID-19 infection. July 30 was pegged as the restart date, and from the look of things they have begun things rather nicely.

ESPN.com tells us that the NBA had quite the successful restart of the tragically truncated current season within the Walt Disney World bubble on Thursday, July 30. Two games were played with which to determine which of the participating teams would get to fill out the seeding of competitors for the playoffs, only partly filled before the COVID-related suspension months ago. First to go at it in this restart date were the Utah Jazz and New Orleans Pelicans, with the second being contested between the LA teams, Clippers versus Lakers.

For the NBA Bubble Season game 1, New Orleans surprised with a solid start that kept their squad leading more often than not. This was thanks to the efforts of Brandon Ingram and Zion Williamson, though neither player would finish the game on the hard court, where Rudy Gobert turned things around for the Jazz and enable them to beat the Pelicans 106-104 down the wire. Among their top scorers in the return were Williamson (13) and Ingram (23), the latter being described by New Orleans coach Alvin Gentry as making plenty of big shots, only for the team to let their golden opportunity pass.

The follow-up game made a prominent showing of just how much the COVID-19 suspension and lack of opportunities to practice or play have had on the NBA teams. The Lakers led by LeBron James came across as having been clearly out of the loop, with the opposing Clippers fighting them for the lead in what Anthony Davis described as a real game, with “two teams battling.” Davis scored 32 points, James and Kyle Kuzma both 16. The Clippers gave just as good with Kawhi Leonard (28) and Paul George (30). Lead runs went 26-5 for the Clippers in Q3, which the Lakers reversed with 36-14.

In the end the Lakers got their team engine to full steam just in time to wrap the game 103 against the Clippers’ 101, though the former did make note that in the later second quarter and the early third they were struggling to score. The Clippers hoped to take advantage with a 66-55 rally, only for LeBron to counter-rally with his team to victory. Leonard would have every right to be disappointed only that he was just too happy to be playing again after COVID-19 sidelined everyone for months.