HORROR Film Stars from “TEXAS CHAINSAW,” “THE CONJURING,” and Things to Do During COVID PANDEMIC 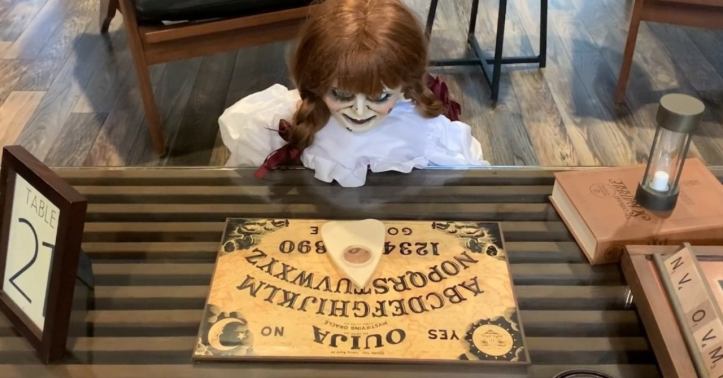 While some Hollywood productions outside of the US have been slowly but surely getting back in the grind of filmmaking or TV shooting, back in the country itself things are still at something of a standstill, with quarantines shuttering studio buildings and virtual events being done in lieu of live shows like the upcoming Primetime Emmy Awards. Meanwhile individual celebrities would stay home and if possible, compensate for not going out by being active on social media. These range from “mainstream” celebrities to those more in line with the “scary” side of showbiz, like chainsaw-wielding murderers and possessed killer dolls.

Entertainment Weekly has the lowdown on what two horror movie stars – one flesh and blood (in real life) and one made of porcelain – are up to lately during the COVID-19 pandemic. Dan Yeager, who portrayed iconic slasher Leatherface for 2013’s “Texas Chainsaw 3D” from Millennium Films and Lionsgate, and Annabelle the haunted doll from the “Conjuring” horror verse of Warner Bros. subsidiary New Line Cinema. Yeager, as July was coming to an end, decided to give his two cents on a COVID safety protocol many Americans were reluctant to follow, while Annabelle, left behind in New Line Cinema, decided to have her own fun alone.

Yeager posted on his official Facebook page this past July 30 in an exhortation for the US in general to embrace the wearing of facemasks to help prevent easy transmission of the coronavirus. Referring to “anti-mask” Americans complaining about breathing difficulties with facemasks, the actor channeled his Leatherface role to drive home the message that taking precautions against COVID is discomfiting, but that surely they are not afraid to try and be safe. “It ain’t easy, but you’re no p***y. Wear your mask, killer,” writes Yeager on his post.

For a less confrontational tale about a horror movie fixture trying to make the best out of the COVID-19 lockdowns, why not take a look at what Warner Bros. Pictures posted on their YouTube channel last Sunday, August 2. That was National Doll Day in the US, so why not have Annabelle the possessed doll from her self-titled films in “The Conjuring” franchise do a promotion. The hilariously tongue-in-cheek video begins with the Annabelle doll alone in the New Line Cinema HQ. After a five-day “time-lapse,” the doll leaves its chair and does stuff like watching TV (while eating popcorn), getting a tan outside, sticking her face in a photocopier, watching the aquarium, and more, all in her 140-plus-day solitary quarantine.