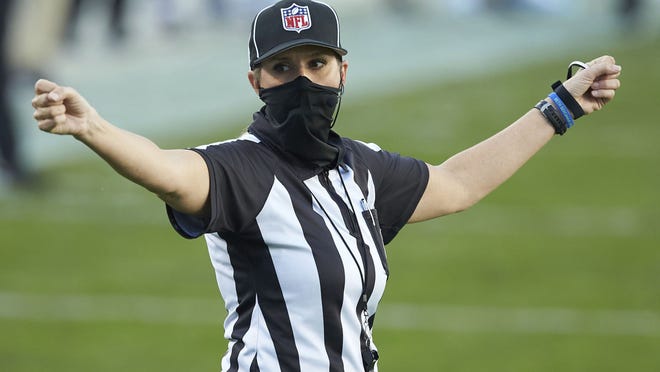 Before, the idea that a woman would serve in any non-athlete capacity at a sport played by men might have been considered revolutionary, perhaps even unbelievable. And yet now women coaching male teams and holding their own; the same goes for female umpires and officials in these same fields. When they happen to be participating in professional leagues, they could get attention. One example is Sarah Thomas. In 2015 she became the first female permanent official in the National Football League (NFL), even getting to officiate at the 2019 Playoffs for one game. But this year will see her greatest duty yet to be discharged.

As CNN tells it, Sarah Thomas has been named as one of the crew of NFL officials for Super Bowl LV next month. The league gave the official announcement only this Tuesday, January 19. Specifically, she will be part of an eight-official team and it will be her job to judge downs in the play of the game. In the statement, NFL Executive VP of Football Operations Troy Vincent Sr. made reference to how Thomas has already made history five years ago and is set to do so once again.

“Sarah Thomas has made history again as the first female Super Bowl official,” says Vincent. “Her elite performance and commitment to excellence has earned her the right to officiate the Super Bowl. Congratulations to Sarah on this well-deserved honor.” And Thomas is in some formidable company regarding the officials for Super Bowl LV. Vincent calls the eight-person crew the best of the best among the league officials who went above and beyond the call in officiating the 17 games that comprise the NFL season, severely shortened by the COVID pandemic. Their total officiating stats are an impressive 88 years and a collective 77 playoff game assignments, some of which were in previous Super Bowl games.

Super Bowl LV is set to take place next month on February 7, to be contested at the Raymond James Stadium in Tampa, Florida. Among the pandemic contingency plans the NFL has for the venue is a possible 20% spectator max capacity. The competing teams are yet to be decided between the AFC’s Buffalo Bills and Kansas City Chiefs, as well as the NFC’s Tampa Bay Buccaneers and Green Bay Packers. These conference championship games will be played January 24.